Many British people have told me how much they loathe ‘Friends’ one of the most successful television shows ever because it’s either too loud, too stupid, too American, not funny enough or the actors are just annoying. Thankfully, my British husband is not amongst those who don’t like it and tolerates my forever addiction and need for a daily dose of it – even if only a quick five minutes.

When ‘Friends’ came out in the US in September of ’94, I didn’t watch it because I was living in Prague and had no TV. Even if I had had a television set, I still wouldn’t have been able to watch it. Oh but did I hear about it? – yes I did, mostly from my younger sister who gushed and declared it was the best thing EVER. Then I moved to Tokyo and still didn’t have a TV and then when I did get a TV we could only watch videos on it or some incredibly bizarre Japanese game shows. It wasn’t until after I moved to England that I watched my first episode of Friends and by then they were only showing re-runs.

Now I do end up watching either a whole half hour show or a snippet of one thanks to ComedyCentral (before it was E4) nearly every day and my kids all seem to share my love of it too.

So it may sound like something trivial, something a bit silly. It’s only a TV sitcom. And now, I suppose it’s a pretty old TV sitcom seeing as it ended twelve years ago, but for me, it’s a wholesome slice of American pie (oh no that’s another show!) that I cannot get anywhere else or anyway in my life. My kids and I have bonded over it many times and they often ask me to explain something about the culture or traditions that come up in some of the episodes. They also love the humor and the characters – there really isn’t anything else like it surprisingly enough because it’s such a simple concept but it’s executed so brilliantly.

I suppose for me, it’s a reminder of the twenty-something American life that I never had. I spent my twenties in central Europe, in the Far East and in middle England so I never experienced that American way of life post college and pre-marriage. It’s like I’m living vicariously through these characters that I can so easily relate to. I understand the references, the jokes, the humor. It’s something I know and almost long for because I never had it first-hand. Plus, it’s my age group – we didn’t have mobile phones or tablets or apps or Facebook or Periscope when we were that age. It was just good old fashioned life with friends. You can’t beat that for a daily dose of American escapism. 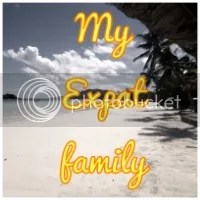 ******************
Meghan Peterson Fenn is the author of Bringing Up Brits and co-author of Inspiring Global Entrepreneurs with Heidi Mulligan Walker. Meghan is also the Director and Chief Designer at her own design company, White Ochre Design Ltd. And, she is an award winning expat blogger.

An American in Helsinki

The older they get…. my three cross cultural kids

View all posts by Meg →

« Happy Mother’s Day to American Moms
School uniform – a life saver or a no no? »

This is THE book for parents of other cultures who are raising their children in Britain.